It is common knowledge now that our diet has a very strong impact on the environment. Agriculture contributes nearly 30% of global greenhouse gas emissions, and pesticides and fertilizers used to grow our food are largely responsible for pollution and havoc on ecosystems. But just what are the worst foods in environmental terms? At the risk of scaring you, most of your favorite foods are probably among the worst!

Let’s see which of our 10 favorite foods have the worst impacts on the environment.

The 10 Worst Foods for Our Planet

1. Sugar: The Worst crop For The Environment?

Sorry to those with a sweet tooth, but your addiction comes with severe environmental consequences. According to a study by WWF, sugar is among the crops most harmful to the planet. By replacing habitats rich in animal, plant and insect life, sugar plantations destroy the most biodiversity in the world. In addition to its intensive use of water and pesticides, the cultivation of sugarcane and sugar beet also causes erosion, such that Papua New Guinea, whose soil used to grow sugar cane, has lost 40% of its organic carbon content, carbon which is now in the atmosphere and contributing to global warming.

In short, intensive sugar production is a real disaster for the environment, and according to WWF it is time to think about a more sustainable sugar culture, including significantly reducing our consumption, as diabetes and obesity is becoming a growing problem as well. 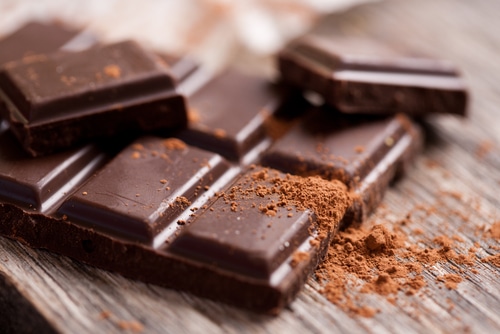 Yes… chocolate too! The Theobroma cacao tree is a very complicated plant that grows only in certain areas around equatorial forests. It requires a lot of water (2,400 liters of water to make 100 g of chocolate) as well. As a result, cacao cultivation puts a lot of strain on natural ecosystems. In recent years, with the incredible increase in demand for cacao, prices have rocketed. As a result, more and more small-scale producers are adopting planting cacao, abandoning their traditional crops and, above all, destroying the equatorial forests in doing so. And deforestation in these areas (Côte d’Ivoire, Ghana, Indonesia) of course affects local biodiversity too.

But that’s not all! The chocolate you taste (especially processed industrial chocolate), has undergone dozens of transformations before it came into your hands: fermentation, roasting, grinding, and adding milk, vegetable fats, sugar, or soya lecithin and other emulsifiers. All these processes considerably increase the environmental impact of your chocolate.

The solution? Avoid industrial chocolates and turn to real chocolate craftsmen, who sometimes manage their bean purchasing closely. What you get? A reasonable means of production and a result sans additives. On the flip side, bigger players in the industry are also starting to consider ecology in their production process. Brands like Mars, Blommer, and Hershey have committed to using only certified cocoa by 2020.

Coffee’s story is similar to chocolate’s. It is grown in areas of very sensitive forests and ecosystems rich in biodiversity. In theory, coffee is a plant that grows under the shade of trees, but for intensive production to be simpler, today an increasingly large part of coffee is grown in full light, often with intense deforestation, use of pesticides and water, and soil erosion.

A study in 2014 found that production today was at its worst in terms of environmental impact. Again, one can ameliorate these dire conditions if one chooses shade-grown coffee, certified as “Bird-Friendly,” or sustainably grown coffee certified as “Rainforest Alliance.” However, not all the cafes have yet bought into this movement.

We touched upon this subject a previous article (What is the most eco-friendly diet? The impact of our diet on the environment). Industrial meat is extremely harmful to the environment: meat and beef production contributes to deforestation and the production of greenhouse gases (notably methane). Beef and lamb in particular are the most harmful meats in environmental terms.

To choose a less polluting meat, patronize small farms, where the animals are raised in the open air and fed in pastures. 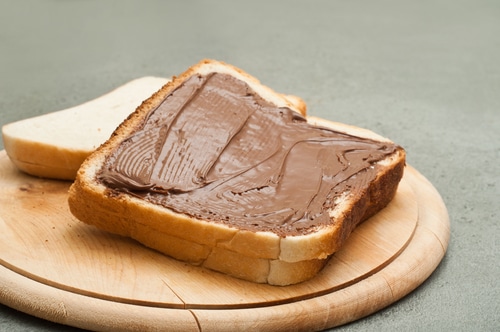 Palm oil is used in the majority of the best-selling industrial sweet products, and a large number of prepared dishes. In fact, along with soybean oil, it is the most used oil in the food industry.

It is also particularly bad for the environment. WWF notes that palm oil production is directly responsible for:

For palm oil also there are certifications, which are supposed to avoid deforestation. But unfortunately, according to the Friends of the Earth, these certifications are more a purchased membership than a standard of conservation, green production, carbon impact, or respect for human rights.

In addition to contributing to deforestation, the production of soybean oil requires the use of heavy industrial processes with large quantities of chemical solvents like hexane, which produces greenhouse gases and various forms of local pollution. Waste from oil production are used to feed livestock, but this contributes to increasing gastric methane emissions, especially from cattle. Finally, the production of tofu and other soy proteins is not an environmentally harmless process either.

7. Mineral Water (And Its Bottles)

Mineral water has the image of being a healthy and natural food. The French adore this drink; they buy about 5.5 billion bottles each year. But if we factor in plastic bottle in which this water is sold, things look bad. It not only takes about 3 liters of water to produce a 1 liter bottle, but also about 11 fluid ounces of oil. 50 billion bottles of water are sold every year in the world, and it is estimated that 17 million barrels of oil are burned annually to make these bottles. That’s the annual gasoline consumption of one million cars.

Industry experts estimate that 80% of plastic bottles sold worldwide are not recycled. Countless bottles end up as waste in natural environments and pollute these ecosystems, including the ocean. (For more info: pollution of the oceans to micro-plastics). Several studies have shown that bottled water contains more toxic residues than tap water in developed countries, and blind tests have shown that consumers cannot differentiate between mineral water and tap water. Therefore, this environmental catastrophe could be avoided easily in countries where running water is healthy and treated. 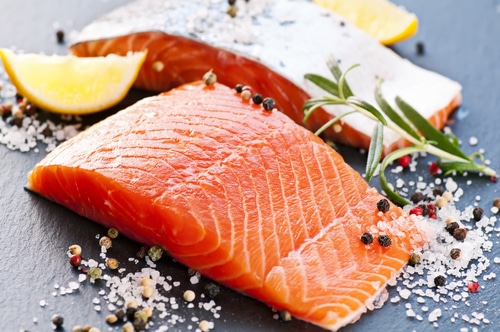 In the list of foods that should be avoided if one is eco-friendly, seafood holds a distinguished place, and salmon is one of the fish species most harmful to the environment. Farmed salmon in particularly damaging culprit: 3 kg of wild fish are needed to make 1 kg of farmed salmon, and the antibiotics and chemicals used in the production spread into the water and contaminate the biodiversity. Bluefin tuna is also a fish to blacklist as it is endangered. These unsustainable circumstances are also the case of certain species of halibut or cod, sole, sea bream or grouper.

Our favorite fish are overfished, so they must be consumed in moderation because the decline in their populations can have an impact on the whole food chain and the marine ecosystem.

9. Rice and Other Popular Cereals

Cereal crops are also very harmful to the environment. Rice requires large amounts of water to grow properly (3400 liters of water for 1 kg of rice). The rice fields then release methane; 100 million tons of methane per year are linked to rice production, making it the largest producer of human methane in the world, even ahead of livestock production.

Cereals such as genetically modified corn are also considered hazardous because their effects on plant biodiversity and pollinators are not yet fully understood. Cereal and flour products are also found to have a strong impact on the environment and on water resources. For example, it takes 1,300 liters of water to make 1 kg of bread made from wheat flour. Even beyond these products, our favorite breakfast cereals contain cereals, sugar, palm oil, and maybe even chocolate, hitting many of the worst foods on our list.

Banana, mangoes and peaches are delicious and healthy, but they also require the most water and pesticides to grow in industrial quantities: 1200 liters of water for 1 kg of peaches, 800 liters for 1 kg of bananas, 1600 for mangoes or 3000 for dates. If you are looking for truly green fruits, you can turn to apples, pears, or oranges (when in season) because they require far fewer input.

As for vegetables, tomatoes, lettuce or cabbage are rather water and food-intensive, especially when produced in unfavorable climates. On the other hand, lentils or roots are very sensible from the environmental point of view. Overall, to decrease your environmental footprint, choose fruits and vegetables that have grown in a suitable environment in the appropriate seasons.

Are There Solutions? What Can We Do?

At the end of this list, one may be left with the impression that everything one eats is bad for the environment, and this is not untrue: all that is produced has an impact on the environment. The question then is this impact sustainable? Eating industrial meat every day? No. Eating mangoes from the other side of the world, out of season? No. One must be sensible with foods that are extensively treated or processed and foods that required disrupting entire ecosystems to produce.

The majority of the environmental problems related to our diet come from the widespread industrial culture. The solution may therefore lie in a transformation of our agricultural model, and the transition from agro-industrial agriculture to agro-ecological agriculture, made up of small, diversified farms. For more information, see our article the food system is broken, here’s how to fix it. 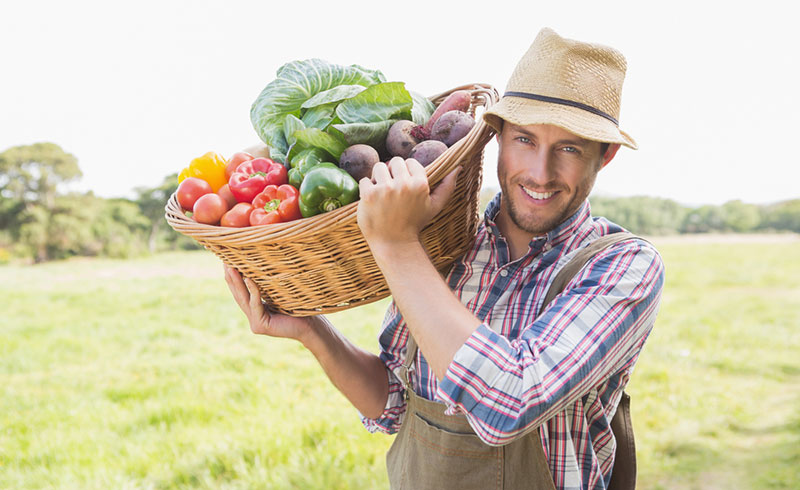 Credits picture : earth on a dish, chocolat, bread and chocolate, salmon on Shutterstock