Diabetes is a cause of premature death and disability that affects over 1,5 million people worldwide. We’ve analyzed some statistics about the decrease in the practice of sports and the increase in the use of technology gadgets and in sugar production in an attempt to explain why the number of people with diabetes has been growing. The results are quite surprising.

The World Day of Diabetes – Why Is It Important?

Since 2007, the World Diabetes Day is celebrated every 14th of November with the goal of raising public awareness about diabetes and related health-care complications. In line with the sustainable development goal number 3 – good health and well-being‘ – the member states of the UN are encouraged to develop national policies for the prevention, treatment, and care of diabetes.

If you care about sustainability, about how we’re taking care of our world and where we’re heading as a species, it is important to have a clear big picture of how humankind is evolving. Studying climate change is indeed truly important, as well as the projections around economic changes or demographic evolution. Nonetheless, it’s also important to ensure healthy lives, promote well-being for all at all ages and check if people are aligned with the way their bodies work and how their life cycle choices can influence their health. That’s why diabetes, recognized as an important cause of premature death and disability, is one of four priority noncommunicable diseases (NCDs) targeted by world leaders in 2011.

This is why in today’s article, we’re focusing on raising awareness about diabetes. Nowadays, it hits 422 million people worldwide (4 times more than in 1980) and killed 1.6 million people in 2016. In the US alone, diabetes affects over 30 million Americans (1 in 10 people have it) and is accountable for 1 out of each 100.000 deaths in the country. Only China (114 million) and India (73 million) are ahead of the US when it comes to the total number of adults with diabetes, while Europe has 58 million people suffering from it. But what is diabetes exactly? How can it be prevented and how is sugar hurting the environment? Let’s find out.

Diabetes – What’s The Difference Between Type 1 And Type 2? 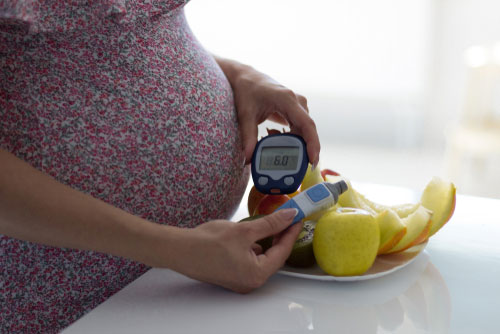 First things first. Diabetes is a lifelong disease that happens either when the human pancreas doesn’t produce sufficient insulin (type 1) or when the body cannot effectively use the available insulin or produces it in insufficient quantity (type 2). Insulin is a hormone that controls blood sugars and brings them from our bloodstream into our brain, muscles, and tissue cells, providing them with energy. When insulin doesn’t do its job, the human blood gets a sugar overdose, also known as hyperglycemia, which over time may lead to blindness, kidney failure, problems in nerves or lower limb amputation, apart from other possible consequences.

The exact cause of type 1 diabetes, that occurs mostly in children and adolescents, isn’t yet identified. Although it is generally agreed that this type of diabetes is the result of a complex interplay between genes and environmental factors, no particular environmental risk factors have been shown to generate a meaningful number of cases. On the contrary, type 2 diabetes is accountable for 90% of overall diabetes in the world (this number rises to 95% in the US) and it’s mainly the result of the mix between genetics and lifestyle choices such as lack of physical activity, unhealthy meal planning choices (rich in high-fat and lacking fibers), both leading to overweight or obesity – that ultimately leave people more insulin resistant.

There are also 2 other types of diabetes that aren’t commonly known. One of them is prediabetes, which is a stage of diabetes characterized by high levels of glucose in the blood. The other one is gestational diabetes – that according to the WHO is a temporary condition that appears during pregnancy and carries a long-term risk of type 2 diabetes. This condition happens when blood glucose values are above normal but still under those indicative of diabetes. Yet, how can we prevent diabetes? Only by eating less sugar? Let’s find out. 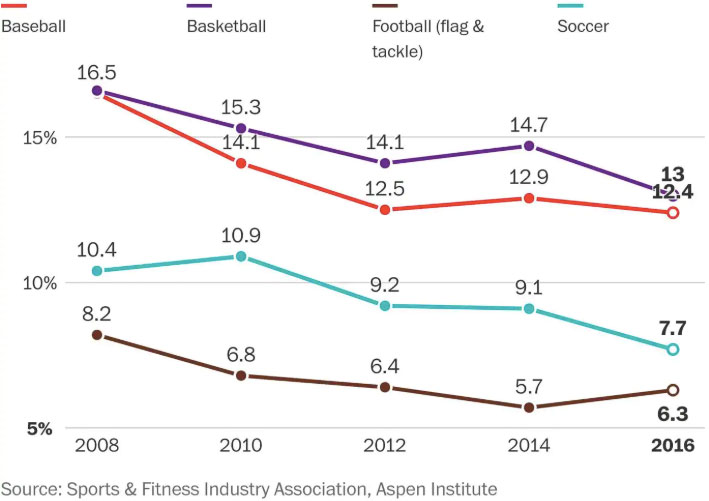 Let’s focus on type 2 diabetes. It affects the majority of people and its causes are known and can be fought. It used to be found only in adults, nevertheless, today,  it is also found in children at a growing rate. Why? One of the reasons is because of lack of exercise. In the picture above we can see that the top 4 youth sports played in the US all decreased from 2008 until 2016. At the same time, the percentage of kids who regularly participated in high-calorie-burning sports decreased by 4% from 2011 to 2016 in the US in both individual and team sports. Considering adults, it is estimated that around 20 million people in the UK are physically inactive, which costs the British government £1.2 billion per year. The world health organization (WHO) estimates that the total healthcare expenditures for diabetes in 2017 were USD $727 billion.

What is then happening? Where are adults and kids spending their time? One possible explanation may be technology. The percentage of kids (aged between 8 and 12) owning smartphones in the UK increased by 17% since 2015 up to 66% in 2017 and children now spend on average more than seven and a half hours a day in front of a screen (e.g., with video games, computer, TV). In fact, did you know that on average, according to the ‘dirty is good‘ movement, children around the world spend less time (<1hour) outdoors than maximum-security prisoners (2 hours)? In the grown-up world, the average UK citizen spends around 76 days each year sitting and 64 days a year watching TV.

Perhaps technology, along with all the benefits it brought to the world, also had a part to play in making society more addicted to the screens and more sedentary? Shouldn’t it be part of the social responsibility strategies of the big tech giants and governments who create develop these technologies to raise awareness on these issues? Maybe we’re also working way more our than we should and our bodies weren’t designed for that?  Long periods of inactivity can diminish metabolism and impair the body’s capacity to control blood sugar levels, regulate blood pressure, and break down fat while increasing the chances of developing mental health disorders and depression. It’s critical that we keep our bodies moving! But our meal choices also play a big role. How big? 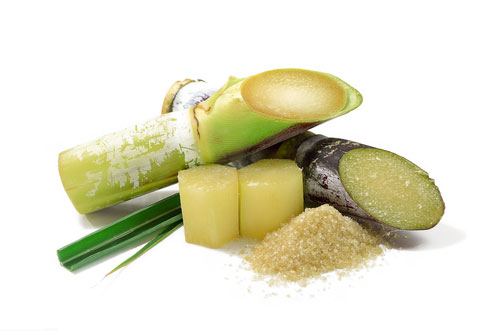 When it comes to the type 1 diabetes, the insulin-producing cells in the pancreas are destroyed by the immune system – and sugar is free of charges. Nevertheless, this question gets controversial about what concerns type 2 diabetes. On one hand, there are studies saying that eating simple carbohydrates (such as sugar or refined flours in fast and processed foods) in big quantities may lead to overweight because sugary foods and drinks contain a lot of calories. On the other hand, different studies also say that excessive sugar intake may be a primary and independent cause of rising diabetes rates and that sugars added to processed foods can contribute to obesity but also have properties that increase diabetes risk independently from obesity.

Is this all? Not quite. Over 86% of the global sugar supply comes from sugar cane, produced and exported from a small handful of countries with tropical climates such as Brasil (top producer and accountable for 1/5 of the world’s supplies), followed by India and Thailand. The rest of the sugar stocks come from sugar beet produced in northern temperate regions of the globe. Sugar is produced as either ‘raw’ or ‘refined’ sugar, and when it goes throw a fermentation process, it is turned into ethanol that’s used as a gasoline additive, in alcoholic beverages or in cosmetic products. The problem?

All these different uses that sugar can have creates a high demand for it. As a result, growing and transforming such big quantities of sugar has large environmental consequences. It leads to the degradation of wildlife, soil, air and water in the places sugar is produced and in surrounding ecosystems – due to the destruction of natural habitats, intensive use of water, air pollution, massive use of agro-chemicals and the discharge and runoff of polluted effluents into the wild. But this isn’t really big news, is it? Single crop agriculture of commodities with big demand, whether its sugar cane, coffee or avocados, all end up having serious consequences on the planet, we know that. In this way, reducing the amount of sugar based products we consume is good for both our health and for the planet.

How To Fight Diabetes And Avoid The Symptoms 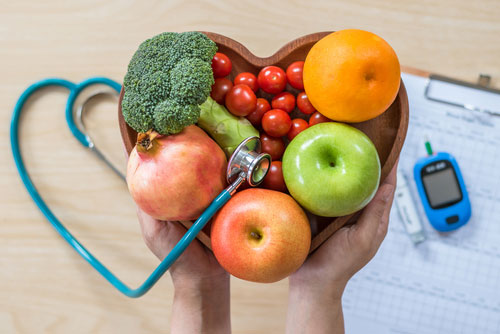 As we’ve already discussed, there isn’t much to do concerning diabetes type 1 because its causes aren’t yet widely recognized. Still, diabetes type 2 can be prevented. We should follow the WHO recommendations and choose healthy foods and drinks, do physical exercise regularly, avoid excessive weight gain and check our blood glucose levels from time to time. On one hand, this will allow us to be one step ahead of diabetes, avoiding symptoms like increased thirst and frequent urination, fatigue, blurred vision or slow-healing sores. On the other hand, we’ll also be preventing other health-related problems such as heart attacks, strokes, depression, and even cancers.

More day-to-day advice can be to consume more water and fewer beverages, as most of them have plenty of sugars and as they’re liquid, our body processes them even faster than sugary foods, causing spikes in the blood “sweetness”. Finding time to cook our own meals, leaving refined carbohydrates behind and instead using whole grain cereals that take our bodies longer to digest and have more nutritional value, works also as a good tip. Though obvious, quit smoking is also a great idea, as well as having a diet rich in fiber since it slows down the rate at which food is absorbed and leads to a more gradual rise in blood sugar levels.

Will an unhealthy society ever focus on keeping a healthy world? Perhaps if humankind was better aligned with its body and mind we’d be building a better and sustainable world? Some studies point towards that direction, should we dig deeper? We’re more connected than ever to everyone, everywhere. But maybe we’ve forgotten to connect with ourselves (body and mind) or we’re doing it very few times?