Microalgae grow fast using little space and water. They can be used as a carbon dioxide transformer, biofuel or food. They’re highly nutritious and can be produced in different ways. Let’s find out more about algae and microalgae.

The Unbelievable Powers Of Algae That Brought Us Here

Algae are fundamental components of the vegetation of marine ecosystems. They can be divided into macroalgae – unicellular or multicellular (with differentiated body parts), non-flowering organisms. Other, exclusively unicellular, microscopic types of algae, that can do photosynthesis or raise food in the dark by using sugars,  often called phytoplankton – are the microalgae. Together, they (most of them) have the ability to produce most of the oxygen in the atmosphere via photosynthesis (they’re autotrophic organisms) and to filter water by reducing the levels of phosphates and nitrates.

Our planet exists since 4,6 thousand billion years, however, it didn’t always have life. Algae played a fundamental role here as they altered Earth’s atmosphere by producing oxygen, therefore allowing eukaryotic organisms (with cells with distinct nuclei and chromosomes containing their DNA) to evolve. Furthermore, they sank in the bottom of the planet, making up deposits of marine algae from which most of the oil that’s currently exploited comes from. Furthermore, approximately 50% of all oxygen production is done by algae, which also make up the diet of seafood. And according to researcher Russell Chapman, they were crucial to the development of land plants as they derive from a freshwater class of green algae, and also to the land animals who eat them and to us, humans, either the vegetarian or the carnivorous ones.

Today, they’re further used in pharmaceutical mixtures as they’re great sources of essential amino acids, vitamins, minerals and omega-3 fatty acids. This helps humans with anti-cancer, cardiovascular and neurological benefits. And at the same time, due to their ability to recover phosphor and nitrogen, they’re being tested as a way to recover these elements from sewage and reintroduce them in the nutrients cycle as organic fertilizers. But there’s still more. Specifically, when it comes to the ability of algae to be used as a sustainable source of biofuel production, able to consume Co2, due to its photosynthetic abilities.

Feeding The Future With Microalgae 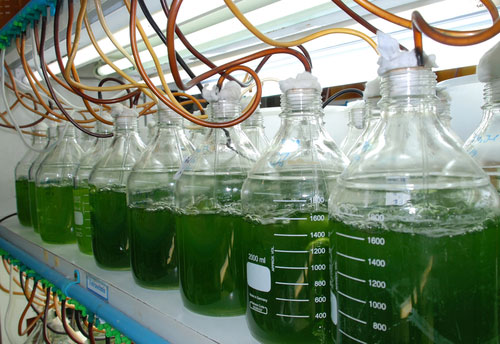 Our planet is facing a food crisis (plus a pollution crisis, a humanitarian crisis, an existential crisis, and a few more). More than 800 million people are regularly undernourished, despite 1/3 of all the food produced is going to waste. According to the forecasts, as the population grows, 9 billion people make up the human family in 2050, slightly more 1,5 billion compared to today. Raising today’s food hard, as only some climates gather the best conditions to produce specific foods such as avocados, coffee, palm oil or sugar crops (the latter 2 used as biofuels too). This is leading to deforestation in places such as the Amazon or Indonesia rainforests, where land space and water expensive processes are also taking place to produce meat. Furthermore, phosphorous and nitrogen-based fertilizers are also used to protect monoculture – degrading soils and damaging the ecosystems and biodiversity.

Coming all the way from the bottom of the ocean, microalgae look like great organisms to fight food insecurity, according to Greene, researcher, and professor at Cornell University. He says algae can be grown for food and fuels in only one-tenth to one one-hundredth the amount of land we currently use to grow food and energy crops. This means that to produce 1kg of beef-sourced essential aminoacids 148,000 liters of fresh water and 125 square meters of fertile land are required, compared to some algae that only need 20 liters and 1.6 square meters of nonfertile land to reach the same number. And while the liquid hydrocarbon biofuel coming from microalgae have the potential to serve the aviation and cargo shipping industries, after using the lipids for biofuels, the remaining algae biomass might be used as animal food or even consumed by humans (you do know what spirulina is, right?).

Doing so would also helps relieve the pressure on fish, as some ocean fisheries are currently overfished or reaching the limits of its maximum production. At the same time, aquaculture fish production is growing,  however, they sometimes face environmental challenges like water pollution and disease among fish. And they are setting the bar high too, raising the demanding for small ocean fish and crustaceous to feed aquaculture fish, as well as other land-raised crops such as soy.

Fuelling The Future With Microalgae And Growing Them 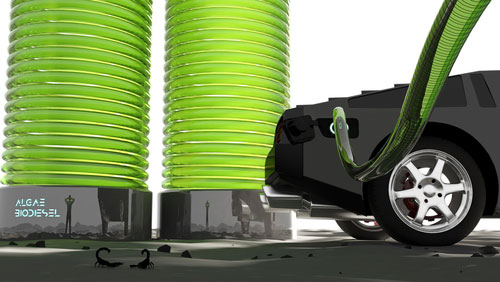 Algae also bring along the possibility of helping to solve the mobility problem by being used as a biofuel. In order to make it, scientists collect freshly produced microalgae, remove most of the water and extract the lipids (fats) for the fuel. However,  an area of 800.000 square meters (~3x Texas) would be needed to respond to the global liquid fuel demand. According to Friedlander from Cornell University, his would simultaneously create 2.4 billion tons of a deffated, protein-rich by-product, which, as we discussed previously, can be used to feed chickens aquaculture fish like salmon.

Microalgae can be produced using different methods, each with its own sustainability footprint. Production via aerobically fermented systems is one way to go. Here, the production takes place in a dark environment where vessels are mixed using sugar as the main energy source for the algae, according to Moomaw et al.. The same authors also speak of cultivating algae in open ponds where all that’s needed is sunlight, carbon dioxide and water (either fresh or salty, depending on the type of algae). Growing microalgae in photobioreactors is also an alternative.

Either way, the positive side here is that marine microalgae can be a good solution for the problem of lack of space that terrestrial agriculture is facing. Microalgae don’t need arable land nor freshwater and many arid or subtropical regions meet the ideal conditions to grow them, following the ideas of Melissa Osgood from Cornell University.

Where Might The Unbelievable Powers Of Algae Take Us? 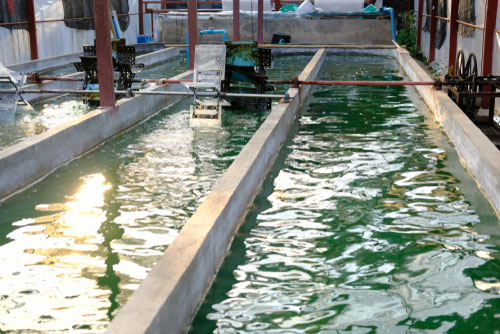 To sum up, microalgae are resources that despite having only a few micrometers in size, have many potentialities. They produce fatty acids, vitamins, amino acids, carbohydrates, polymers… all this while sucking carbon dioxide, either from the atmosphere or straight from closeby power plants producing it. Their fat can be used to produce biofuel and they even leave amazing protein-rich leftovers which can be (and is already) used as food.

They grow quicker than terrestrial plants and produce the same amount of bioenergy using less space and water, as we’ve discussed above. Algae and microalgae can, therefore, be important on what concerns food security. They can contribute to reducing the negative environmental (and even social) impacts happening around terrestrial food production, especially in developing countries.

Ending up with Russell Chapman’s quote that feels like poetry: roses are pretty and oak trees are impressive, but no other groups of “plants” have done so much, for so long, and, for so many as have the algae! Let’s wait and see where they’ll take us. But climate change is here, so let’s not wait very patiently.