NEW: Top 10 Companies With The Best Corporate (CSR) Reputation In 2020

Global CR RepTrak 100 is a global survey that ranks global companies based on their corporate social responsibility (CSR) reputation. In late 2018 it collected the opinion of over 230,000 people from the general public across the 15 largest economies. Let’s take a look at the main results and find out which companies have the best CSR reputation.

Why Is CSR Important For The Reputation Of Brands?

Nowadays it’s easy to prove and hard to deny the importance that corporate social responsibility (CSR) policies have in the reputation of companies. In fact, some studies published over the last years showed that companies with good CSR practices find their reputation and brand image improved. Nevertheless, having these concerns isn’t enough and it’s crucial that companies have good stakeholder engagement strategies that allow them to effectively communicate their plans, leading as well to better chances of investment.

As a consequence, the number of companies seeking to improve their CSR reputation has been rising, as well as their concerns about letting their stakeholders know of the frameworks under which they develop their CSR strategies and how they have been improving their processes, products, and services and becoming better companies for people and for the planet. For this reason, the Reputation Institute, an organization specialized in studying brand reputation and corporate image, has been working for several years in the development of a ranking of the companies that have the best CSR reputation.

Once again this year, the Institute delivered its ranking of the 100 most renowned companies in the CSR area. The data to build this ranking was collected from the opinion of over 230,000 people from the general public, during January and February, across the world’s 15 largest economies. These results were then crossed among 3 main dimensions of corporate responsibility – governance, citizenship, and workplace – and the final outcome was the ranking of the 100 most reputable companies in CSR. But which companies have the best CSR reputation? Let’s take a look at the main results.

The Top 10 Companies With The Best CSR Reputation 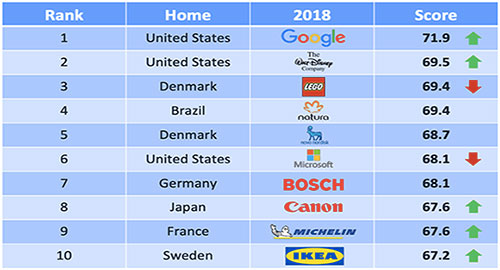 The figure above reveals the top 10 companies with the best CSR reputation, with Google standing in the first place as the company with the best CSR reputation, despite the huge environmental impact of the Internet sector. The big tech firm is the only one to have a strong score in the ‘workplace’ dimension and is also the leader in the sub-dimensions ‘equal opportunities’, ‘rewards’ and ’employee well-being’. Possible reasons for this result? One may have to do with the fact that Sundar Pichai, Google’s CEO, spoke out about the deferred action for childhood arrivals (DACA) and looks like an inspiring leader who lives out the company’s values. Another reason may have to do with the company being recognized as one of the most eco-friendly firms in the internet industry, as they have been investing in green energy programs to power their data centers with 100% renewable electricity. At the same time, Google.org, Google’s philanthropic foundation, is also helping to fight poverty and grow sustainable development. In the end, what really matters for this ranking, is that the image that citizens have of Google is that it is a dynamic and innovative company that truly cares about its employees, society and the planet.

The second position in the ranking goes for The Walt Disney Company, an iconic and caring company that communicates extremely well. They developed a very appealing and informative online sustainability report, available in 6 languages and that’s connected to the global reporting initiative (GRI) – showing that the company is truly committed to CSR and has an integrated strategy to manage it. Disney also has a well-structured philanthropy organization that gave $348 million dollars to non-profits all over the globe in 2017 alone and all together, the company managed to build a great CSR reputation.

Lego is sitting on the third position in the ranking for the best CSR reputation. The Danish company shows up in the study from the Reputation Institute as the leader in ‘transparency’ and ‘social contribution’ and had the highest scores in the ‘governance‘ dimension. The company’s last year announcement about replacing its plastic sources for plant-based plastic sourced from sugarcane went mainstream and proved to be a bold move by the firm – showing that the Lego’s products are aligned with its CSR values on social contribution and business transparency. But which companies stand after Lego and the other top 10 as the firms with the best CSR reputation?

The 100 Companies With The Best CSR Reputation 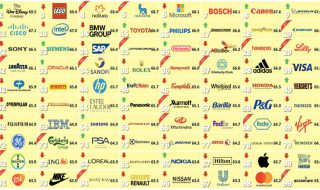 It’s important to bear in mind that the ranking above may not necessarily represent the most responsible companies or the ones that effectively have the best CSR policies and practices. Instead, this ranking works a reflection of what are the perceptions of public citizens regarding how companies have been handling with CSR issues. In the end, the companies that have been better ranked are the ones who succeeded in communicating effectively their CSR strategies – which doesn’t necessarily mean that they have the most effective strategies in the world.

This study and the ranking that followed it both end up being one more proof that CSR its an indirect synonym of reputation – and ultimately, of financial performance. This is the time to focus on corporate responsibility and companies need to be up to the expectations of consumers, be transparent about their work and take care of society, their employees and the planet. More importantly, they need to effectively communicate with their stakeholders and share their inside CSR culture to the outside.