As rising waters have already started to (and will further) flood coastal regions and small island nations, seal level rise (SLR) is one of the most worrying impacts of global warming. But what is it exactly? What is causing it? And how can it be avoided?

Sea level is the base level for measuring elevation and depth on Earth. Hence, sea-level rise is a climate change phenomenon through which the ocean water volume increases, mostly as a consequence of ice-sheets and glaciers melting and water thermal expansion. As a consequence of sea-level rising, coastal life around the world is threatened and adaptation policies need to be developed to avoid further and faster catastrophic impacts.

The height of the ocean surface at any given location, or sea level, is measured either with respect to the surface of the solid Earth (relative sea-level (RSL)) or a geocentric reference such as the reference ellipsoid (geocentric sea level). RSL is the more relevant quantity when considering the coastal impacts of sea-level change, and it has been measured using tide gauges during the past few centuries and estimated for longer time spans from geological records. Geocentric sea level has been measured over the past two decades using satellite altimetry.

In principle, integrating RSL change over the ocean area gives the change in ocean water volume, which is directly related to the processes that dominate sea-level change (changes in ocean temperature and land-ice volume).

It’s Not The First Time The Sea Rises

The sea level has changed before. In fact, it is believed to have changed by over 100 meters (300 feet) during the glacial cycle that happened approximately 18 thousand years ago. Like today, these changes happened as ice sheets waxed and waned due to variations of the global average temperature, which, by its turn, was caused by changes in the solar radiation reaching the surface of the planet (due to variations on its orbit and orientation). Moreover, according to UNESCO, these temperature changes were also amplified by feedbacks associated with changes in the Earth’s albedo effect and greenhouse gas concentrations.

At What Pace Is The Sea Level Rising And What Is Causing It?

According to NASA’s satellite data, the sea level is rising by 3.3 millimeters every year. By why is this rise happening? There are many physical processes that contribute to sea-level changes. Among them is the storage of water in dams or the extraction of water from aquifers. However, on a decadal time scale, they both have a modest impact on sea-level changes, whereas the main contributors to this phenomenon at this timescale are:

Land ice—glaciers, ice caps, and ice sheets—stores nearly two-thirds of the world’s freshwater. However, this reservoir is getting smaller. Every summer, a natural process of large mountain glaciers melting takes place as a response to warmer temperatures. Later, when the winter comes, the opposite happens and the melting gets balanced. Except that recently, with the exposure to warm temperatures for longer periods of time because of global warming, ice formations melt for longer periods than usual, which results in an ice imbalance and ultimately, on sea levels rising.

Higher temperatures warm up the ocean water. And as it heats up, the water expands. As a result, over the past 25 years, half of the sea-level rise was caused by warmer oceans that occupy more space.

What is behind the causes of sea level rising?

Simply put: human-caused global warming. Human activities that burn fossil fuels like oil and coal (mostly from industries and to generate electricity), or tropical forests that used to store carbon and are cut down for agriculture or mining end up increasing the concentration of atmospheric greenhouse gases. And as Earth’s heat doesn’t leave the atmosphere, oceans absorb around 80% of the heat excess – and they’ve been warming since the Industrial Revolution.

The Consequences Of Sea Level Changes

The rise of the sea-level is one of the consequences of climate change. Average sea levels have grown over 23 cm (8 inches) since 1880 – and of these, 7,6 cm (3 inches) took place over the last 25 years. Current, there is a 3.3cm sea-level rise every year. As a consequence, there will be more (and stronger) storms and hurricanes, many times in regions with large population centers that will need to be reallocated. Regarding environmental impacts, what’s at risk is the erosion of soft cliffs and beaches, agricultural sites and mangrove forests that turn into wetlands (affecting biodiversity) or coastal cities that get flooded. The contamination of the soil and groundwater with sodium chloride (NaCl, also known as salt), is also a possible consequence.

The Need For Mitigation

Climate change mitigation will be imperative to prevent the harshest impacts of sea-level rise. As the WWF puts it, climate change mitigation means avoiding and reducing emissions of heat-trapping greenhouse gases into the atmosphere to prevent the planet from warming to more extreme temperatures. Among many possible mitigation actions, there is the transition to a decarbonized electricity grid, improving mobility networks so they become more efficient (and shared) or completely stopping deforestation.

However, since mitigation actions will take long periods (decades) to have an impact on the rising temperatures, it’s important to plan and adapt to the consequences coming in the short term.

The Need For Adaptation

Predicting how the sea level will rise is complex (due to regional variation factors) but doing so and monitoring coastal areas is crucial to better adapt to the consequences of this phenomenon. In the absence of adaptation, the consequences mentioned above, whose risk could be significantly reduced, become more likely to happen with a greater impact. In this way, identifying the most vulnerable coastal regions and acting on them because very relevant. Though investing in prevention might rather than in solving future issues is not very appealing financially, planned adaptation is proved to be more cost-effective than forced adaptation.

In this way, cyclone prevention centers can be built within these coastal areas to protect local people in extreme weather events. Seawalls and stop-banks are also common defense strategies against flooding, as well as replenishing sand along eroded beaches – however, they are not sustainable over the long term. Other approaches include elevating and flood-proofing houses, buildings, and other structures, as well as restoring natural buffers like mangroves or barrier islands. 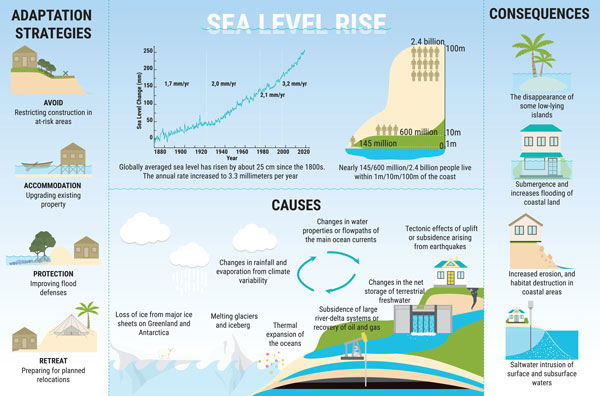 There’s a scientific consensus that global sea levels will rise over this century and transform coastlines. We will need to adapt to these changes, to build more resilient infrastructures and to take care of fragile ecosystems that are also under threat. But we must also slow down and stop climate change and there’s no other way to do it rather than stopping our emissions of greenhouse gases into the atmosphere: because it’s not only devastating impacts of sea levels rising that are at stake but the survival of our species.