What Is Biogas? A Short Definition

Biogas is a type of biofuel naturally produced from the decomposition of organic matter. When this organic matter is exposed to an environment without oxygen they free a blend of gases. Although what’s mostly released is methane (between 50-75%, depending on the number of carbohydrates present in the mix) and carbon dioxide, other gases are released too in smaller quantities.

As biogas production happens in the absence of oxygen, this process is also referred to as anaerobic digestion. Simply put, there’s a fermentation process that breaks down organic matter, turning what once was waste into a source of energy that can be used to heat, cool, cook, or for regular electricity production, once it’s burned.

What Is Biogas? Video

What Types Of Organic Matter Does Biogas Use?

As we spoke above, what is mainly used for the production of biogas and placed inside the fermentor (a special container) are:

Yes, biogas production can happen naturally across ecosystems. Either in rice paddies or swaps and at the bottom of the oceans, rivers or lakes where sediments are exposed to anaerobic conditions.
Animals, as well, can produce biogas too, especially methane. Ruminants such as cows, deers, sheeps, camels or lamas can also create methane during their digestive process while producing food in their rumen (a part of these animal’s stomach).

According to Gasum, the process of biogas production works as follows:

Biogas Energy And The Environment 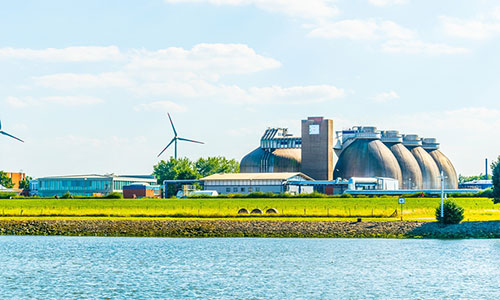 Biogas (and biomass too) is often referred to as a CO2 neutral source of energy that simply recycles that CO2 in the biosphere. This happens because the CO2 released during the biogas combustion phase is the same plants in the biomass have absorbed during photosynthesis to create organic matter.

At the same time, energy production via biogas also has the potential to reduce GHG emissions. In fact, model calculations show the digestion of animal manure in a biogas plant reduces the emission of greenhouse gases by approx. 0.3 and 0.6 kg CO2 -eqv./kg organic matter for, respectively, pig and cattle slurry. With an equal mixture of cattle and pig slurry with, respectively, 10 and 5% DM and 75% VS, this corresponds to a reduction in the emission of greenhouse gases of approx. 26 kg CO2 -eqv./m3 biogas produced.

The truth is that as biogas is used to replace coal or oil, less oil will be globally used and CO2 emissions will come down as the global energy demand from fossil fuels decreases. The same is true for transport purposes and replacing diesel or petrol.

Producing biogas through anaerobic digestion also has meaningful advantages over other forms of bioenergy production and it has been assessed as one of the most energy-efficient and environmentally beneficial technology for bioenergy production. However, this doesn’t mean biogas energy is totally clean. When compared to other sources of energy, specifically fossil fuels, it is for sure a better solution, environmentally speaking. However, if crops are grown specifically to use in biogas production it is a waste of soil, energy, and pesticides. And if cattle waste didn’t exist in such big proportions it’d mean less GHG in the first place.

To sum up, it’s important that the production of biogas (renewable energy) keep and starts becoming an integral part of the economy. It is a great solution to take advantage of the energetic potential of residues and it contributes to the recycling of nutrients and organic carbon. It’s a way to go in the process of aligning human lifestyles with the one from nature and making our economy more circular.

Image credits to biogas on Shutterstock